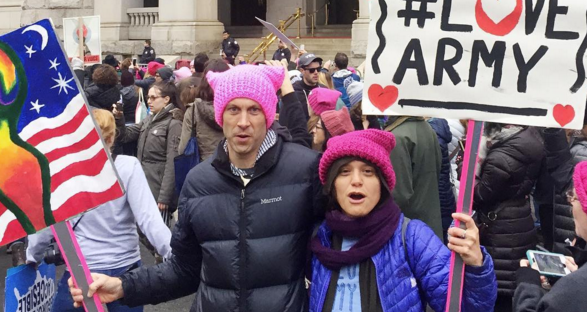 “Don’t be a pussy!” is apparently the thing every little boy is supposed to not be. So what happens when the occasion arises during the Women’s March on Washington for this guy when he dons a #pussyhat? As our new president and lawmakers get to work destroying environmental protections in the first days of a Trump presidency, we get some personal reflections from environmental activist Matt Wasson, whose life’s work was recently featured in this NPR story. The work ahead is personal and powerful: sorting through masculinity and seeing the progressive movements best opportunity is in pussy power.

Women are now leading a resurgent and increasingly united progressive movement and it’s the greatest opportunity we’ve seen in years for the majority of this country to recapture the reins of power. I want to help men overcome their resistance to following the leadership of women by delving into its roots – like the “pussy-shaming” we faced in locker rooms by the likes of Donald Trump (and unfortunately, bought into and dealt out ourselves).

Here’s a link to the GOOD MEN PROJECT that was brought up during the interview.

Matt Wasson is an ecologist and the director of programs for Appalachian Voices where he oversees the award-winning online campaign to stop mountaintop-removal coal mining on iLoveMountains.org.

Archives (podcasts prior to 2015 are lost)